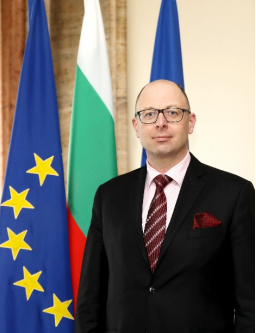 Yordan Bozhilov was born on 27 November 1969 in Sofia, Bulgaria.

After graduating from university and completing compulsory military service, Mr Bozhilov began work as an expert at the Ministry of Defence in 1992. He successively occupied various positions in several MoD structures, to include chief expert, head of department within the Administrative and Information Services Directorate, Head of the International Organisations and Arms Control Department, Director for International Cooperation, Deputy Director for Security and Defence Policy, and Head of the Political Cabinet of the Minister of Defence. In 2013, Mr Bozhilov left the Ministry of Defence and started work with the Bulgarian Academy of Sciences. Since 2018, he has engaged in research, consultancy, and teaching.

Yordan Bozhilov is the founder and first chair of the Sofia Security Forum, which specialises in research and events in the field of security, defence and international relations.

Yordan Bozhilov has a Master’s Degree in Political Science from Moscow State University (1991) and a Master’s Degree in Law from the University of National and World Economy (2000). He has completed courses and specializations at the Geneva Centre for Security Policy, the George C. Marshall European Centre for Security Studies in Germany, and the NATO Defence College in Rome.

By Order of the Prime Minister Kiril Petkov, Mr Bozhilov was appointed Deputy Minister of Defence and assumed office on 09 March 2022.

He speaks English, French, and Russian.

He is married and has one child.